The Redwood Freshmen were topped in extra innings in a classic pitcher’s duel on Thursday at Endriss Field.

The game was tied 0-0 at the end of seven innings with neither team managing to get a runner as far as third base. San Rafael managed to push an unearned run across the plate in the top of the eighth for the only score in the game and the final margin of 1-0.

Redwood pitching was again stellar with Nick Welch going the first five innings while allowing just five baserunners and striking out 10.  Alex Hagen came on in relief and added two more shutout innings striking out three San Rafael hitters without giving up a hit.  Matt Birchenough then came in with a runner on first in the eighth and he also held San Rafael hitless while adding the 14th and final strikeout for Redwood pitching.  However San Rafael would not need a hit to score the winning run as the combination of a leadoff walk, a sacrifice bunt and the only error of the game would give San Rafael the 1-0 lead and final margin of victory. 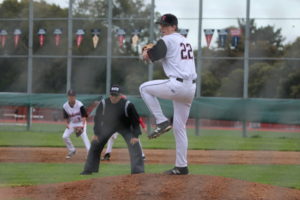 San Rafael pitching was equally effective inning after inning as Redwood would have just four baserunners in the game.  Jake Gassman had two of the three hits for Redwood and Birchenough added the final hit with 2 outs in the bottom of the eighth.

The loss drops Redwood’s overall record to 6-3 and 2-1 in MCAL play.