Moody field. Kyle Felder started for the Giants and went three strong innings, striking out two. In a back and forth battle, the Giants got on the board in the first inning. Jackson Bender got on base with a short blooper single to center. Bender would steal second. After a wild pitch, Jackson would take third. Jackson Barry then put the ball in play to the right side of the diamond, scoring Bender from third. First baseman, Jack Morken, kept the inning alive with a hard hit ball to left field. Morken would get caught stealing second to end the inning. (1-0 Redwood).

Serra would tie the game in the top of the second. In response, Sam Warren would lead off the bottom half of the inning with a single to left. Catcher, Jake Nordstrom, would later be caught doubled up after Jacob Klionsky just missed driving the ball down the first base line.

In the top of the third, Serra would take the lead back by one run. Although Redwood committed an error to help the Padres, that was made irrelevant when shortstop, Zachary Gordon, wisely tagged the baserunner caught between second and third, then threw the ball home to secure the third out of the inning and ending the multi-run threat. Starting Pitcher, Kyle Felder, would help his own cause by smashing a double over the center-fielders’ head. Gordon followed up with a nicely hit ball to the right side of the diamond, advancing Felder to third. The giants would tie the game with a Jackson Bender single. (2-2 after three)

Eric Simonson entered the match in the top of the fourth in relief of Felder. Simonson kept the Serra batters off balance, inducing pop-ups. The Top of the fourth ended when catcher, Jake Nordstrom, fired the ball down to first baseman, Jack Morken, who then ran down the unsuspecting baserunner into the eventual tag by Z. Gordon. In the bottom half of the fourth, the Giants would grab the lead back and never look back. Jack Barry hit a single to right field. Jack Morken would follow up with a hard hit ball deep into the hole between short and second, which the shortstop could not handle. Sam Warren then put the ball in play, advancing Barry to third and landing safe at first. Jake Nordstrom gave the Giants the lead with a chopper to second, scoring Barry. (3-2 Redwood).

The Giants would lean on reliever Maxim Kawashima to pitch the fifth and sixth innings, shutting down 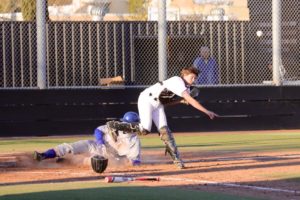 Serra. Maxim would also draw a lead-off walk in the bottom of the fifth. He then stole second. Zachary Gordon then connected with a single to left field, advancing Maxim to third base. A wild pitch opened the door for the alert Kawashima to sprint home. (4-2). Two more wild pitches allowed Gordon to make his way to third base. Second baseman, Nick Cook, then drove the ball to right field, allowing Gordon to safely slide under the tag at home plate. (5-2 Redwood).

In the top of the sixth inning, the game got a bit testy with the bases loaded and one out. With the game on the line, Maxim Kawashima fielded a come-backer at the mound and wisely threw the ball home to Nordstrom. As Jake forced the second out, the Serra player slid into home with his spikes deliberately aimed at Nordstrom, who absorbed the cheap shot and threw the ball down to Morken, securing the double play and end the inning. For his efforts, the Serra player was ejected for intentionally trying to injure our player. In the bottom half of the sixth, with the Serra dugout in a bit of an uproar, Morken iced the situation with a hard hit troublemaker back up the middle, narrowly missing the jumpy pitcher. Jackson Bender was handed the ball in the seventh for the successful save with the help from some brilliant defensive work by Jackson Barry. Final Score: 5-2 Redwood