The Giants played back to back games this week to kick-off the second half of their 2017 season. At home versus both San Marin and Novato, Redwood played San Marin on Thursday night in a “must-win” type of game. The contest was tight through three innings, with solid pitching from Kyle Felder and some dazzling defensive plays from Jackson Barry. The Giants finally broke through in the bottom of the fourth inning after Sam Warren singled to left field. Nick Cook followed up with a double to right, advancing Warren to third base. With runners at second and third, starting pitcher, Kyle Felder, helped his cause with a single past the shortstop, scoring Warren and Cook (2-0, Redwood).

Felder would battle through five shutout innings, striking out seven and giving up

just one hit. In the bottom of the fifth, the Giants would add to their lead. Jackson Barry hit a two out double to left field. Eric Simonson would enter the game to pinch-run for Barry. Jack Morken followed up with a timely double over the center-fielder’s head, scoring Simonson (3-0, Redwood). Making up the third member of Redwood’s Redrum Row, Sam Warren would join Barry and Morken with a line drive single to center-field, scoring Morken from second (4-0, Redwood).

The Giants would rely on Maxim Kawashima and Robbie Wilson in relief of Felder in the sixth and seventh innings. Redwood committed three errors on the day, which ultimately allowed San Marin to avoid the shutout. Final Score: 4-1

On Friday, the Giants resumed league play versus Novato High School. Head coach, Billy Jack Ryan, relying on his teams’ depth, started a reworked squad and they didn’t miss a beat. Redwood shutout the overmatched Hornets 6-0 behind starting pitcher Jack Hake. The Giants put three runs across the plate in the first inning. With Wilson and Kawashima in scoring position, Hake singled up the middle to bring the two base runners home. Ryan Jessen would also add an RBI with a deep sacrifice fly to center, scoring Nate Charles (3-0, Redwood).

In the bottom of the third, the Giants picked up two more runs. Nate Charles was walked. Sam Warren then crushed a double to left field, scoring Charles from first base (4-0, Redwood). Warren would steal third. With the shift on for Robbie Wilson, he would lay down a bunt toward first base, scoring Warren (5-0, Redwood).

In the fourth, Haiden Jones led off with a single to center. Jones would steal his way to third before Cole Zesiger put the ball in play, scoring Jones (6-0, Redwood). The Giants used Jackson Bender, Jeremy Sellier and Eric Simonson in relief of Hake to complete the shutout. A leaping catch by centerfielder, Nate Charles, preserved the shutout in the fifth inning during Novato’s only threat. Notably, the Giants’ pitching staff needed only 88 pitches to earn the win. Final Score: 6-0 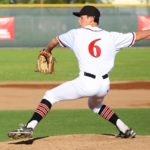 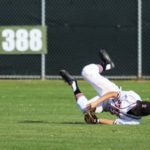 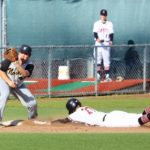 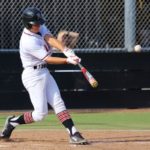 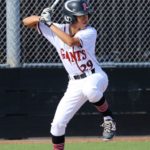 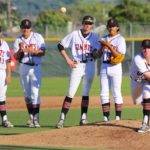 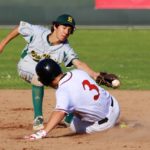 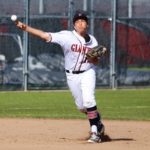