The 4-0 Giants needed only 1 hour 35 minutes to roll over Montgomery High School from Santa Rosa.

Starting pitcher, Jack Hake, gave up a harmless blooper to left field in the first inning before settling into a dominate performance. In the first inning, Hake was helped by a superb play by center-fielder, Jared Robinow, who chased down a shallow ball hit to left-center, then threw across his body to first baseman, Ryan Jessen, catching the runner well off base for the double play. Hake would never look back, striking out five of the next six batters through four shut-out innings of work.

The Giants remained scoreless, however, until the bottom of the third inning. Jared Robinow lead off with a bunt single. He would then steal second. Z Gordon put the ball in play, advancing JR to third. Nate Charles punched the ball to second, scoring Robinow. (1-0 Redwood, after three). 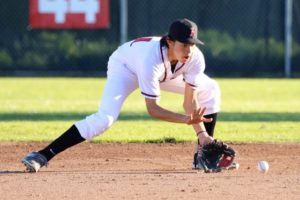 The Giants would add to their lead in the fourth. Jackson Barry started things off with a lead-off walk. Hake followed with a hard hit grounder to short, which was booted, leaving runners at first and second. First baseman, Ryan Jessen, then drove the ball to left-field, loading the bases. Second baseman, Nick Cook, took a wild pitch, allowing Barry to score from third and advancing both runners into scoring position. Cook then laid down a perfect suicide bunt toward first base, scoring two runs in the process on his way to a three RBI day. Remarkably, Nick out ran the phantom tag at first, and should have been called safe but for the mistaken belief of the umpire that the defender had the ball-which he didn’t. Catcher, Jake Nordstrom, didn’t miss a beat, and connected with a shot to left field, landing on second base. A wild pitch would move Nordstrom to third. Shortstop, Z. Gordon, then singled Jake home. Gordon would get picked off at first to end the inning. (5-0 Redwood, after four)

Reliever, Cole Zesiger, would enter the contest in the top of the fifth and maintain the shutout through the

next two innings. The Giants added to their lead in the fifth. Maxim Kawashima, singled to left-center. Max then promptly stole second. Jack Morken then connected with a pitch, sending the ball to left field, scoring the speedy Kawashima from second. (6-0). Morken would take second. Barry then hit the ball to short, but an over-thrown attempt to first left him safe at first and Morken scoring from second. (7-0). Cole Zesiger then singled to center, sending Barry to third. Zesiger would steal second, leaving runners in scoring position for Nick Cook. Cook put the ball in play, scoring Barry. Sam Warren entered the game and immediately contributed, punching the ball to center and scoring Zesiger. (9-0 Redwood, after six).

Left-handed reliever, Jeremy Sellier, came in for the save, mopping up the outmatched boys from Montgomery in due course.

Photos from the game can be found at: http://www.jordonwarren.photography/p63030583