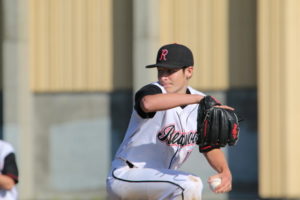 yesterday in Petaluma.  Redwood entered the bottom of the inning with a 4-2 lead but the first five Casa Grande batters reached base without getting the ball out of the infield and suddenly the score was tied at 4-4.

Matthew Smallbach came on in relief in the toughest of situations with the bases loaded and nobody out.  Smallbach retired the first batter he faced on a popup to first keeping the score tied at 4-4.  However with the outfield playing shallow with the winning run at third and less than two outs what would normally have been a routine fly ball to left turned out to be the winning single as the Casa Grande runner crossed the plate to end the game at 5-4.

Matthew Birchenough started for Redwood and faced eight Casa Grande players in the first inning but escaped major damage by getting the last batter on strikes with the bases loaded and keeping the score close at 2-0 Casa Grande. After giving up a one out single in the second, Birchenough settled down retiring the next 10 in a row before giving up a single in the fifth.  He would pitch a total of 5 ⅔ innings striking out five. 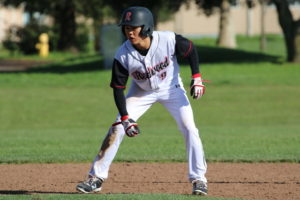 Redwood got on the board in the top of the second when Cam Gregory and Jonathan Yu led things off with back to back walks. After advancing to third on an error Gregory came in to score on a bunt by Birchenough.  Later in the inning Lucas Roy came up with a big two out two run single to plate Birchenough and Aaron Kim making it 3-2 Redwood.

In the fifth Redwood added to the lead.  Satoshi Miki led off with a single and then stole second.  After advancing to third on a passed ball Miki scored on a ground out RBI by Jesse Gassman to give Redwood a 4-2 advantage.  But the lead would not last.

The loss drops the Giants to 6-4 for the season.