4/28:  This has been a ‘Season of Firsts’ for Head Coach Mike Firenzi and the Varsity Giants.  For the first

time since taking over the helm at Redwood, his Varsity squad is not sitting atop the MCAL standings in first place, a position they held for two consecutive years.  With a 9-3 MCAL record, the Giants sit in second place alone.  Today, a career first would haunt Firenzi as his team lost to the Terra Linda Trojans, for the first time, this being his 25th year as a head coach in the MCAL.  “I don’t really care about personal records, but I do know that my teams were at least 49-0 against TL until today”, Firenzi said after the game.  “They they hit us hard and deserve credit, they are on a roll.”

Another first, the Giants were outhit by their MCAL opponent for the first time this year.  Terra Linda amassed a total of fifteen hits, the highest total given up by Giants pitching this year.  Redwood answered with nine hits of their own.  Ironically, the Trojans didn’t have a field to practice on Thursday, but the word is that instead of taking the day off or watching their underclassmen play on their field, they went to the batting cages at McGinnis Park and hit Thursday afternoon.  It would seem that the pitching machines have a “Redwood Pitching” setting as nine Trojans contributed to the hit parade, four of which had multiple hits. 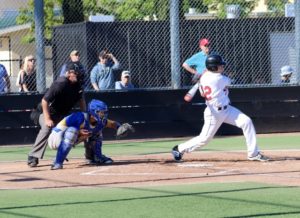 Again, in usual fashion, the Giants took an early lead, scoring three runs in the bottom of the second inning.  Luke Zlatunich led off with a walk and stood on second after an errant pick-off attempt.  Aubrey Sine bunted him to third and Michael Connors hit a fly to left, deep enough to score Luke.  With two outs, Trevor Foehr singled setting the table for newcomer Jackson Barry.  Barry was brought up from the JV recently due to injuries to Michael Connors and Pascal Brassey and made his first start today.  Barry roped a 1-2 curveball through the hole between first and second for another first, Jackson Barry’s first at-bat at the Varsity level resulted in a hit.  Josh Katz went in to run for Barry and Dane Goodman belted the third Giant hit in a row, scoring Foehr and Katz, putting the Giants up 3-1 going into the top of the third.

Dane Goodman, Anthony Pomilia, Luke Zlatunich and Michael Connors had hits for the Giants with

Trevor Foehr and Jackson Barry adding two hits each to the team total.  Goodman would also knock in two runs on the day.

The Giants are on the road on Tuesday to face Tam at 4:30.  The Red-Tailed Hawks are in third place with an 8-5 record, the Giants are in second place with a 9-4 record.  In order for the Giants to execute another first (the first time they have come from behind to win the round-robin), they will most likely need to go on a five-game winning streak, starting on Tuesday.