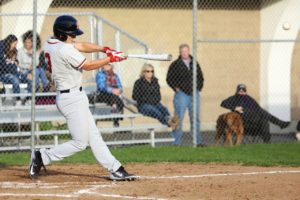 The Giants finally got on the board in the sixth inning. Jacob Klionsky drew a lead-off walk. Jared Robinow laid down a sacrifice bunt, advancing Klionsky to second base. A wild pitch landed Jacob on third for the sure-handed Jackson Barry, who drove the ball deep into left center, scoring Klionsky. Sam Warren drilled his second hit of the day into right field, moving Barry to third. Jack Morken was issued a four pitch walk, loading the bases for Giants starter, Kyle Felder. Felder drove the ball to center field, scoring Barry from third. The inning ended with Warren getting narrowly tagged out trying to score from second. 2-0 Giants. Haiden Jones came in to pitch the bottom of the sixth, quickly dispatching the first two Petaluma batters. The Giants would get into trouble after a routine hit to left field lead to too many extra and, as it turned out, ill-advised throws around the Diamond. Despite the parade errors, Jones hung tough and got his team off the field with more consistent pitching. 2-2 after six.

After being away from the game and not pitching for nearly two years, newcomer Jackson Bender, was handed the ball by head coach Billy Jack Ryan to close out the game for the Giants. Bender delivered, getting the Giants into the eighth inning with the help of his Giant teammates.

Nate Charles entered the game in the top of the eighth with a leadoff single. He then stole second. First baseman, Ryan Jessen, stepped up and drilled the ball to left, scoring the speedy Charles from second base (3-2 Giants). In a moment of some confusion, the umpire thought there were two outs, when in fact there was only one. His repetitive assurances duped the Giants into believing the same. The eighth inning rally was cut short when the runners were going on another hard hit ball by Sam Warren that turned into a surprise double play.

Jackson Bender once again made the long trot to the mound for the save. With the game on the line, the Petaluma batter hit the ball to short left-center. Putting his mark on this game, left-fielder Kyle Felder ran hard to his left and laid out to make a miraculous catch and important second out. The final out was equally entertaining, when Felder tracked down a hard hit ball to left and threw a seed to cut-off man Jackson Barry, who pivoted and threw to catcher, Jake Nordstrom, who applied the final game winning out. Final score: 3-2 Giants.

The Giants travel to San Francisco tomorrow (2/25) to take on Archbishop Riordan High School at 10:00 a.m. The JV side is hoping to see the return of the walking Wounded-Nick Cook, Robbie Wilson, Maxim Kawashima and Jeremy Sellier-for tomorrow’s game. The Giants are expected to throw Cole Zesiger, Ryan Jessen and Jack Morken after using four pitchers in tonight’s contest. All hands will be on deck as the boys work out the rain-soaked pre-season kinks. Go Giants!

Game images can be viewed at: http://www.jordanwarren.photography/p861289948